It’s been tantalizing and a little agonizing, in the final weeks of the landmark TV series “Mad Men,” to  guess how it will all end – especially for the protagonist and last of the “difficult men,” Don Draper.

Will he jump off a building? (Absolutely not.)  Will he find the “sad tornado,” mystery waitress Diana? (It’s hard to care about this.) Will he escape to California and re-brand himself yet again? (Quite possibly.)  Is he D.B. Cooper? (Oh, come on.)

Mad Men has been a powerful force in television, and not only for its portrayal of the last breaths of the boozy ‘60s advertising industry. The acclaimed drama captures our attention because of its depiction of a supposedly powerful man’s attempt to outrun his traumatic childhood. Viewers have watched Don drink, womanize, hurt people and hurt himself. As my colleague Perry Firth describes it, “he is the living, breathing embodiment of the truism, hurt people hurt people.”

Perry is a grad student in school psychology, one of Firesteel’s most popular bloggers and my go-to person for anything related to childhood trauma. You’ll see her influence throughout this piece. Because she is not a Mad Men viewer (yet), she was the perfect person to work on this piece with me, and assess Don’s behavior from a more clinical perspective, as opposed to my position as a fan who desperately wants to see a realistic yet positive end to Don’s journey through self-destruction and redemption.

And you can’t write about Don Draper without addressing his terrible childhood, which crops up throughout the series.

Note: There may be spoilers in this post; however, one of the beautiful things about watching Mad Men is that even knowing what happens doesn’t diminish the pleasure of the viewing experience.

“Love Was Invented By Guys Like Me”: Adversity Beneath the Surface

Don didn’t grow up in the kind of family that pulled together and faced adversity together, their love helping them survive. In fact, there wasn’t any love in that bleak home. Don was just another mouth to feed, a weight around the neck of the people who raised him out of obligation, not affection.

Yet, outwardly, Don has achieved the American dream. He came from nothing and became a millionaire, along the way marrying a gorgeous model, buying a beautiful house in the suburbs, raising three adorable children and rising to the top of the New York advertising world.

However, what keeps viewers hooked is less his success and more his inability to hang on to it.

Don is an alcoholic. His health is generally bad, and he contributes considerably to the success of his tobacco-industry clients. He has difficulty attaching to anyone emotionally and sustaining a mature adult relationship. He destroys his own marriages, and endangers those of friends, with his deceptiveness and serial womanizing. He treats women as conquests to be tossed aside, including a string of secretaries – the exception being his protégé, Peggy. He’s known to disappear without warning, leaving colleagues in extremely awkward situations.

One question the show is really asking, through Don’s adult actions, is: How much adversity is too much adversity? On a deeper level it asks viewers: Should the loss and adversity which drive someone’s actions dictate how we interpret them?

“This Never Happened”: Can ACEs Explain Some of Don’s Choices?

As it turns out, much of Don’s behavior is grounded in what psychological research has identified as adult consequences of childhood adversity and trauma. We know that serious adversity and trauma in childhood, especially when it is sustained over the child’s lifetime and isn’t buffered by protective factors, can have serious long-term consequences. It can even make it hard for people to make healthy decisions. In fact, the research areas of Adverse Child Experiences (ACEs) and toxic stress explore these relationships specifically.

ACEs research looks at how adversity in childhood hurts adults, and how it shows up in behaviors like substance abuse, poor health and increased risk for early death. ACEs are actually broken down into different events, which can then be used to generate an ACE score, which can help to explain someone’s risk for negative consequences in adulthood, or partially explain why an adult is struggling. For example, childhood sexual abuse, emotional neglect and mental illness would yield a score of 3 ACEs.

About a year ago, Perry wrote about this fascinating research. More recently, to help me with my Mad Men analysis, she explained ACEs in the context of the show.

“The original ACE study included the following events as Adverse Child Experiences: physical, emotional and sexual abuse; physical and emotional neglect; parent with mental illness; incarcerated household member; domestic violence; parental substance use; and parental divorce,” Perry said. “These are all events, especially when they accumulate, that we know cause toxic stress and potentially lasting mental and physical health consequences. Today, however, other ACEs that could be added to the list include poverty and childhood homelessness.”

Though we meet Don when he’s living the American dream in the 1960s, his story gradually unfolds to reveal some staggering hardships in his Depression-era childhood.

“It Doesn’t End Well”: ACEs and the Adult Don

With all this information about Don’s past in mind, I asked Perry what she thought his ACE score was.

Here’s her startling assessment: “Using a broader interpretation of ACEs, I would put Don’s ACE score at 9.”

I’ll repeat: Nine. We know that even one ACE can have serious ramifications in adulthood.

“However,” Perry said, “one question that comes up for me is: What would Don Draper’s life have looked like if he’d had one of the most powerful resiliency factors for children: a stable, healthy and supportive caregiver? Probably much better! Adult care and support is powerful in its ability to buffer the impact of extreme stress for children.

That’s just the beginning. We could go on.

Q: Wow! Perry, with this kind of score, is someone like Don at risk as an adult? Where do you think he would end up?

A: “Yes, absolutely, someone with the experiences you just listed is at risk as an adult, especially without the influence of protective factors. What Don’s life illustrates is the degree to which childhood trauma can shape emotional reactions, substance use and impulsivity in adulthood – and lead to adult homelessness too.

“In this sense Don’s life is a cautionary tale of what happens when families and children don’t get the support they need early. It also reveals how important support is not only for struggling children, but for struggling families.

“The really powerful thing, however, is that history is not destiny. People with histories like Don can and do break free of their childhoods; it’s just that with as many adversities as Don faced, that becomes difficult without the influence of well timed support systems.”

So there you have it. There is hope for Don. Most importantly, love and stability are crucial in the life of a child from every income scale.

As viewers, we struggle with our conflicting feelings. We at times think Don is terrible but we understand why. Yet we can’t help feeling frustrated when he keeps making the same mistakes, causing grief for 95 percent of everyone who ever loved him. Our conflicted response to his repetitive mistakes reveals something more broadly that all people struggle with, and is one that plays out in the real world all the time.

That is, to what degree can we attribute blame when we know that a person has been wounded by their past? At what point does deep pain fail to excuse individual bad decision making?

As Perry points out, this is something that people grapple with, for instance, as they consider whether a person with a substance abuse problem deserves housing and support for their addiction.

Don was not born terrible.  We can see that his traumatic childhood has led to his tumultuous adult life, and that’s probably why we forgive him so many transgressions.

Now, we all know people who have been homeless as children and grew up to be strong, healthy, thriving adults, no trace of terribleness in how they interact with others.

But that doesn’t necessarily make for a good TV drama.

“Tomorrowland”: The End of the Road

So, what’s to become of Don in the May 17 finale? What of the people he cares most about, especially sassy teen/future first-wave feminist Sally?

Sally has been exposed to multiple ACEs, both those of Don and her own, including her parents’ divorce. But we all know that Sally – despite a troubled father, and a mother who is Betty – is going to be fine. One reason is that she has grown up feeling love not only from her damaged parents but from other significant adults, including stepdad Henry and stepmother Megan.

Financially and professionally, Don has been able to overcome his past. Even though he came from poverty, had little education and battled many childhood demons, Don did have some advantages – namely that he was a man, white, straight, an American citizen and not part of any faith community that was typically excluded in a business setting. Too, the cost of housing related to income was staggeringly lower than it is today.

It was possible for him to keep landing on his feet, or on his couch, as we see in the opening credits. We have to question if such a rags-to-riches story is possible today, or if someone in Don’s time with more barriers (Carla? Sal?) could have succeeded as he did.

The larger question for our hero is whether he can repair his battered emotional self.

Of course, this is all fiction; and we don’t even know if Don’s story is true within the show. Creator Matthew Weiner likes to keep us guessing. The whole series could all be Don’s imagined alternate life; it could be a construction within the mind of another character, á la St. Elsewhere, or even a bad dream. Some suggest it is the book that Ken Cosgrove always wanted to write.

Don seems to be traveling to some kind of ultimate confrontation with his childhood adversity. But what we do know is that, as Perry pointed out, history is not destiny. Though homelessness can have toxic effects on children, they can also recover and thrive.

Our job as advocates is to keep fighting for equality and opportunity for all children, but recognize that even for people with a past like Don’s, the script can always be rewritten. 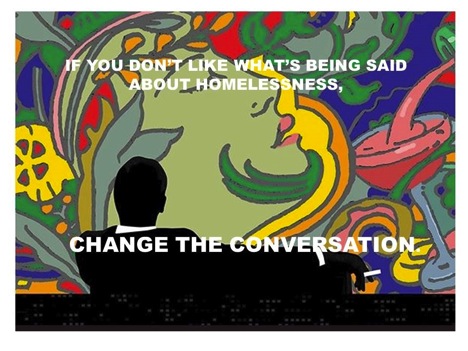 “Change the Conversation”: What You Can Do