For some students, educational success is almost a given. They get good grades and attend college with an ease so natural it almost feels pre-ordained. There are many reasons why this is so, not the least of which is a stable middle-income family.

However, other students do quite poorly, struggling in school for years before they drop out.

There is one group of students who have particularly poor outcomes, both in educational attainment, and other indicators of life “success”: Students diagnosed with emotional-behavioral disorders who receive services under the special education category Emotional Disturbance.

Making up six percent of the special education population, the children who have been diagnosed under this category provide an example of how poverty, other demographic variables, and educational practices all interact to influence not only school success, but special education placement. In Washington state, there are nearly 8,000 students receiving services under this category.

As it turns out, there is a relationship between experiencing poverty and toxic stress (and trauma) in childhood, and the special education category Emotional Disturbance.

More specifically, many of the children receiving services under this category are from impoverished backgrounds. And at the same time, because of high dropout rates, many are unable to achieve the stability, education and employment they need to rise above their childhoods.

So when we look at how children fare after receiving services in this category of special education, we recognize some of the factors which can contribute to intergenerational poverty.

But before we begin, however, here is the Individuals with Disabilities Education Act (IDEA) definition of emotional disturbance.

What is Emotional Disturbance?

The Emotional Disturbance category of special education is a condition exhibiting one or more of the following characteristics over a long period of time and to a marked degree that adversely affects a child’s educational performance:

(a) An inability to learn that cannot be explained by intellectual, sensory, or health factors.

(b) An inability to build or maintain satisfactory interpersonal relationships with peers and teachers.

(c) Inappropriate types of behavior or feelings under normal circumstances.

(d) A general pervasive mood of unhappiness or depression.

(e) A tendency to develop physical symptoms or fears associated with personal or school problems. 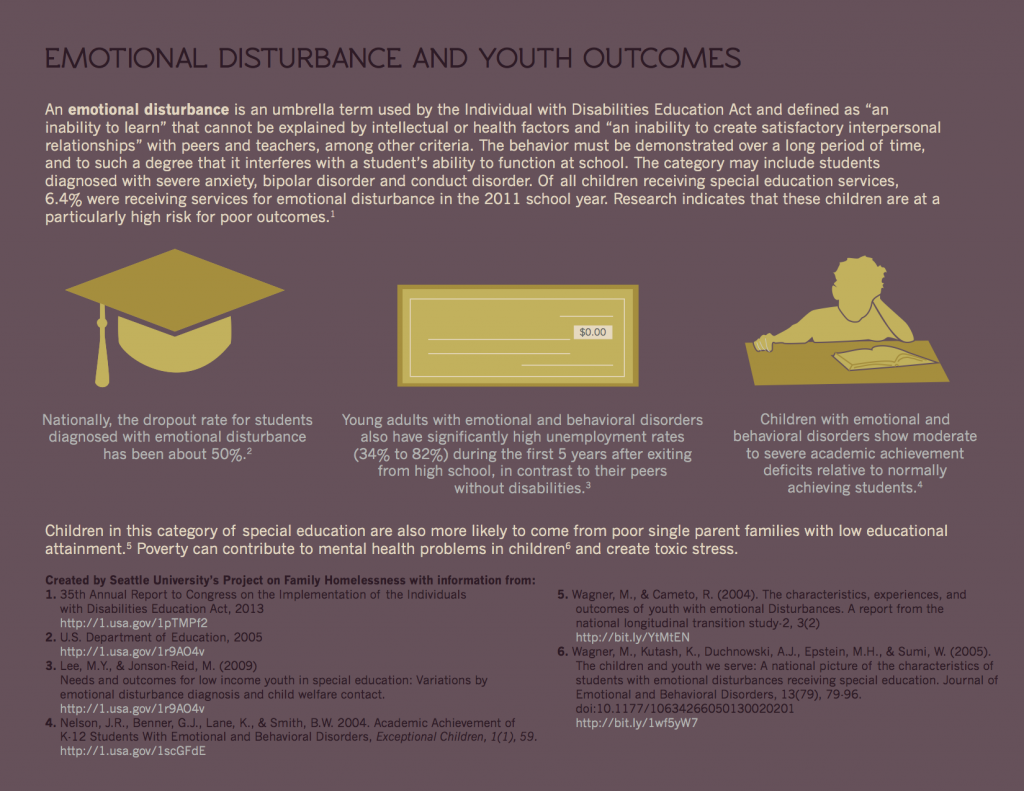 Let’s look at some statistics related to emotional disturbance and success in school and life.

Looking at these figures, we see a cycle emerge. Children from poverty are more likely to have emotional-behavioral disabilities, and to end up receiving services under the category Emotional Disturbance. At the same time, children with emotional-behavioral problems are more likely to drop out than any other student population. Compounding this situation is that even if a child doesn’t have a diagnosable mental health issue, poverty means that they still face a high dropout rate compared to middle-income peers.

And, students who drop out of high school are going to struggle to find secure employment.

Other factors associated with Emotional Disturbance

The decks may be stacked against these children for other reasons, too.

In turn, these students have some of the worst outcomes of all students served in either special OR general education, despite the fact that they have no specific cognitive issues.

Indeed, research indicates that children living with emotional and behavioral problems demonstrate moderate to severe academic skill deficiencies, and that this starts early.

As young as second grade, children being served under this category of special education have been found to perform worse than their peers in vocabulary, listening comprehension, spelling, social studies and science.

Ultimately, because of the lack of academic skills, traumatic and impoverished backgrounds, their alienation from school, and the complexity of meeting their needs, they also are more likely to:

Further, for many of these students, their outcomes in life are influenced not only by poverty, but by race, gender and some interesting trends revealed by special education practices.

The Emotional Disturbance category of special education is actually a hot-button issue in the field of special education. There are many reasons for this, including that these children don’t always succeed in the way that we would hope. However, a major reason it generates controversy is because of the fact that African-American boys are more likely to end up in this category than their white peers.

All of this is concerning for several reasons.

I bring all this up to illustrate how child — and later adult — outcomes are influenced by risk factor after risk factor, by gender and race, by special education labeling, and even teacher expectations. This only scratches the surface.

Why the poor outcomes? For at least some of these students, it is the effect of toxic stress on brain development.

Many of the outcomes faced by these children occur through a confluence of events.

Starting young, children raised in poverty and homelessness are more likely to be exposed to high levels of toxic and chronic stress. In turn this impairs their brain’s ability to effectively process stress, impacting everything from the pre-frontal cortex to the amygdala and the hippocampus. This means that many of these students end up in the special education category Emotional Disturbance because of environmental effects, and neurobiological changes in the brain. Also, as discussed earlier, many of these students come from families with multiple risk factors known to impair child development.

Thus, many of the challenges facing these students involve weaknesses in the brain’s regulation of emotion and behavior, and less ability to refrain from impulsive acts. They also struggle socially. These are skills linked to the prefrontal cortex, and the social processing of information. They can also be a result of trauma. Children who have been maltreated may struggle in the school environment.

Finally, when considering how this interacts with gender and race, we see how many of these students end up getting caught in a web of risk.

However, what is maybe less apparent is how poverty can manifest in a specific category of special education. In doing research for this post, I was struck by how the children diagnosed with emotional-behavioral disabilities were more likely to come from single-parent families with low education, and that they traditionally have the highest dropout rate of any student population. For me, this resonates of intergenerational poverty, and how intense mental health needs and socio-demographic factors like race can interact to increase the likelihood a child will struggle.

Finally, the reality is that many students, both those with and without a diagnosis, don’t get the mental health care they need. Research indicates that students who do have a emotional-behavioral disorder, and who need special education, get diagnosed and receive help later than their peers with other disabilities.

And even with an individualized education program and behavioral supports, the intensive therapy they need is often financially out of reach. Schools are rarely equipped to provide that level of care, and school psychologists and counselors often have more students than time.

Ultimately, the success of vulnerable learners rests not only with schools, but with communities. Early identification and intervention are essential, as are coordinated mental health and school systems.

Yet as a society we need to also invest in wrap-around services that stabilize families, and of course, safe, healthy, affordable housing.

No matter the strength of a child’s school or the quality of the school’s mental health services, students will never be at their best without a stable home and a stable family at the end of the school day.

What you can do

Read other posts in this series